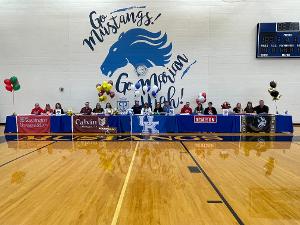 Bloomfield Hills, MI (November 9, 2022) Five Marian High School seniors announced their commitment to play collegiate athletics in the 2023-24 academic year. Two signed their letters of intent to play a collegiate sport next fall through the National Letter of Intent (NLI) program when student-athletes can commit with a school that is a member of the National Collegiate Athletic Association (NCAA) at Division I or Division II level. Three others have been accepted to, and offered roster positions at NCAA Division III institutions. Four of the five student-athletes are members of the nationally ranked Mustangs volleyball team that is on a mission to defend their state title. The team will play in the Michigan High School Athletic Association (MHSAA) regional championship this Thursday at 6:00 PM at Marian. Marian’s swim & dive team will compete in regional action on Thursday at 5 PM at Cranbrook and again at Catholic League Championships November 11 and 12.

Rachel Bello, daughter of David and Sarah Bello of Bingham Farms, is an eight-time all-state, and Catholic High School League (CHSL) champion through three varsity seasons.  Bello, who was also named All-Catholic Academic Team by the Archdiocese of Detroit, competes in the distance, and the individual medley in freestyle and breaststroke.  In addition to swimming, she is a member of the National Honor Society and Marian Medical Club.  She will be swimming for head coach Brad Shively at Washington University where she plans to study biology and pre-med.

Evelynne Oegema is a defensive specialist/libero and captain of the defending state-champion volleyball team.  In 75 sets played this season, she leads her team in serving aces (75) and aces per set (0.7).  The daughter of Melanie and Jim Oegema of Franklin, “Evey” is a standout in the classroom as well, having earned All-Academic, All-Catholic Academic Team, First Honors, and is the recipient of the Sr. Lenore M. Pochelski Endowed Scholarship. She has also a member of Marian’s varsity ski team, varsity track and field, National Honors Society, National Arts Honor Society, and is involved in co-curricular clubs including the book club, ambassador club, big sis/lil sis program and is a member of the worship team at her church.  She will play under Amber Warners at Calvin where she plans to pursue a business degree.

“Being a four-year varsity athlete and a captain on the Marian varsity volleyball team has taught me so many intangible lessons that I could not be more grateful for,” said Oegema who played for head coach Mayssa Cook.  “I have learned about the importance of hard work and determination.  I have learned how important it is to set goals for oneself and to do everything you can to achieve those goals.”

Reagan Sass, an outside hitter for the Mustangs volleyball team, is the daughter of Aimee and David Sass of Bloomfield Hills.  In 72 sets played so far this season, she has 130 kills, 3 blocked shots, 43 total blocks, and 17 assists.  Sass, a four-year varsity

volleyball player, is also a member of the track and field team at Marian.  She is a member of the National Honors Society and the National Arts Honors Society and is also involved in several co-curricular clubs including Project Care, the culinary club, and the book club. She will be playing for head coach Carter Cassell at Denison as she continues her studies in the area of finances and economics.

“Being a varsity athlete at Marian has taught me how to not only be a good volleyball player, but a good person, too,” said Sass.  “Marian volleyball has taught me many valuable lessons over the years that I will never forget, and I am so thankful for my teammates and the Marian community for supporting me and showing me how to be a strong person.”

Ava Sarafa, the volleyball team’s setter and a leading offensive player for Marian for the last four years, has earned high praise throughout her prep career and was recently named first-team All-America by the American Volleyball Coaches Association (AVCA) this season and is a current contender for MaxPreps national player of the year.  The daughter of Sarah Ervin-Sarafa and Maher Sarafa, the Michigan Miss Volleyball award finalist earned a spot in the MHSAA record book when she surpassed 4,000 career assists in August.  In 105 sets played this season, she has 1,151 assists, taking her prep career total to 4,884 averaging 10.2 assists per set during that time.  This season she has 45 aces, 239 digs, and 87 kills.

“Being a varsity athlete at Marian has prepared to help me to face different life situations including leadership roles, communication, and developing relationships with other people,” said Sarafa.

Ella Schomer, who plays rightside for Marian’s volleyball team and was named third-team All-America by the AVCA this season, is the daughter of Heather and Lincoln Schomer of Clarkston. Schomer, another Marian finalist for the MIVCA Miss Volleyball award, has a prep career of 703 kills, 158 blocks, 696 digs and 99 aces in 332 sets played.  She has been awarded All-Catholic, All-Region, All-State (second team), and was named on the AVCA Phenom List. She will be playing for head coach Lynze Roos at Wofford where she will study kinesiology and human biology to pursue a career as a physical therapist.

“Being a varsity athlete at Marian has prepared me to be versatile and open-minded in any situation coming towards me,” said Schomer.

The recruiting process continues for several Marian senior student-athletes. Future signing day celebrations have been planned on February 1, 2023 (NCAA Division I and II) and also May 3, 2023 (NCAA I, II, III, NAIA, NJCAA, USCAA) for those who are yet to make a final commitment.

Located in Bloomfield Hills, Marian is a Catholic college preparatory school for young women sponsored by the Sisters, Servants of the Immaculate Heart of Mary. The mission of Marian High School is to ensure, within a Christian environment, an excellent education built on a strong academic curriculum, which will enable young women to value human diversity and live responsible lives of leadership and action based on gospel values.