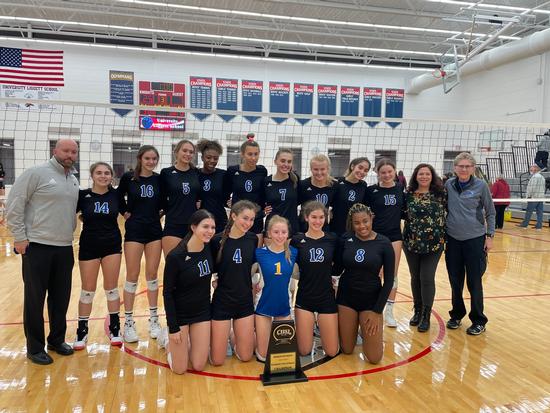 GROSSE POINTE WOODS - For the third time this season, rivals Mercy and Marian met on the volleyball court. The Mustangs swept the season series from Mercy without dropping a set on their way to a second consecutive Central Division crown.

Mercy advanced to the Bishop Division Final with a semifinal win over Divine Child. Marian took down four-seed St. Catherine to set up the finals matchup at University Liggett School. Tuesday night ended just as the previous two meetings, with Marian winning in straight sets, 3-0.

With Mercy keyed on outside hitter and Miss Volleyball finalist, Ava Brizard, several other Mustangs stepped forward to keep the Marlins guessing. Seniors Janiah Jones and Sarah Sylvester had huge ontributions in the middle from Kentucky-commit, Ava Sarafa. Brown commit Sophie Treder had several kills from the outside as well.

Marian completes the regular season with a 45-1 record that includes a top ranking in Michigan regardless of class and a #4 national ranking by MaxPreps.

The district round will be held at Dave Feldman Gymnasium on the campus of Marian High School beginning November 1. Marian drew a first round bye and will face Farmington High School in the MHSAA district semifinal Wednesday, November 3 at 7pm.


No highlights for this season yet.