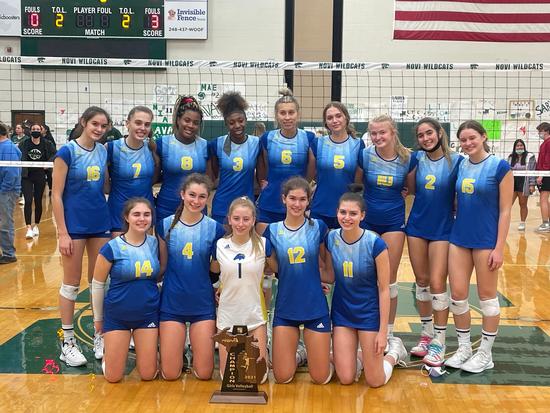 NOVI - For the second consecutive season, Marian earned a spot in the MHSAA Division 1 Regional Final.

The Mustangs faced a stiff challenge at the hands of the Novi Wildcats in the semifinal Tuesday, but advanced by way of a 3-1 victory. Marian dropped just the fourth set of the season and was motivated to get back on the court Thursday for the Regional Championship.

Lake Orion advanced to the final with a five-set thriller against Lakeland and even though the Dragons were swept on two separate occasions by Marian during the regular season, they came out hungry for payback.

After winning the first set in fairly comfortable fashion, 25-14, Marian (50-1), found themselves down by five after a great rally by the Dragons. Junior Evey Oegema served the Mustangs to within a point and senior Janiah Jones knotted the score at 16 with a solo block. The mustangs never looked back and cruised to the 25-19 win in the second set.

Marian squeezed tighter in the final set and completed the sweep on a Ava Brizard kill, 25-18.

Davison High School will be the opponent in the Division 3 quarterfinal. The Cardinals advanced after defeating upstart Traverse City West. While Davison was set to be the host of the quarterfinal tournament, the site was moved to Royal Oak High School to ensure a neutral court. The match is set to be played on Tuesday, November 16 at 7pm.

The winner advances to Battle Creek for the state semifinal Thursday, November 18.


No highlights for this season yet.